m2m’s Mentor Mothers throughout sub-Saharan Africa are accustomed to being “put to the test” every day in their roles as peer mentors to women, children, and adolescents who are living with HIV. But for the first time in m2m’s 18-year history, a team of 30 Zambian Mentor Mothers is now “giving the test” as well. sting is a method for detecting the genetic material of the HIV virus. Through a simple finger prick (or heel prick in the case of infants), a few drops of blood are drawn from the client, applied to absorbent filter paper, air dried for several hours, and then sent to a laboratory for examination. With its analysis of HIV genetic material rather than the HIV antibodies assessed by traditional liquid blood testing methodologies, DBS testing helps avoid the likelihood of false HIV-positive results. DBS specimens also pose less of a biohazard risk to handlers, and are easier to transport and store than liquid blood samples.

UNAIDS 2019 data show that Zambia is currently ranked among the top 10 countries worldwide in recorded HIV rates, with an estimated 1.2 million people living with HIV and 12,000 children infected with the virus annually. Like the rest of Africa, this nation faces an acute scarcity of clinicians and healthcare workers who are qualified to test for HIV. According to the World Health Organization, the African continent currently has a shortage of 4.2 million healthcare workers.

To assist nurses and clinicians inundated with heavy patient caseloads, a cohort of 30 m2m Zambia Mentor Mothers was recently trained to conduct DBS testing in three Zambian provinces. It’s the first instance of m2m Mentor Mothers expanding beyond their roles of education, health services, and psychosocial support to include testing for the virus. The training was conducted in partnership with the USAID-funded Supporting an AIDS-Free Era project and the Zambian Ministry of Health.

“With its highly accurate results, DBS testing is an effective weapon in preventing mother-to-child HIV transmission in pregnant and breastfeeding women. We saw an opportunity to step up and support overwhelmed nurses who didn’t have time to conduct this testing which is now a national guideline,” says m2m Zambia Country Director Priscilla Banda. 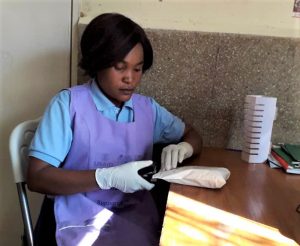 Mentor Mother Nidah Chisenga is seen here preparing blood samples to be sent for further analysis. The samples were collected from clients by using the DBS method.

“There’s a need for Mentor Mothers to move beyond current roles, enabling them to conduct HIV tests of women and infants at key service delivery points such as these where there was an influx of clients seeking health services,” she adds.

In addition to being taught how to perform DBS testing, the Mentor Mothers received specialised counselling theory and practice training as well

m2m Zambia Mentor Mother Nidah Chisenga, who is stationed at the Lubuto Clinic in Copper Belt Province, credits her training and new ability to conduct DBS testing with making a real difference in how she engages with clients and fellow professional healthcare workers: “Being able to conduct the HIV testing and host informative health education sessions helps me establish stronger peer relationships with my clients. Our testing work makes things so much easier in the clinic and provides a welcome relief to the nursing staff who are often under pressure.”